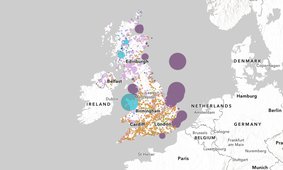 Back to Resource management videos

Modern energy has been a miracle for transforming our lives and raising living standards. But the energy sources that we have relied on for centuries are harming our precious planet.

In this video, we team up with geographers Jenny Pickerill, Marian Jacobs and Ankit Kumar, to investigate challenges of achieving energy sustainability, at Hockerton Housing Project: a pioneering community of eco-homes in Nottinghamshire. The video explores:

Thank you to Hockerton Housing Project for enabling us to film this video. Thank you also to Bill and the Hockerton team for making aerial drone footage available for use in the video.

Thank you to the team at Atkins, for making sustainable energy footage available for use in this video.

Data on the UK's 2019 Energy Mix from BP's Statistical Review of World Energy.

Data on Global Primary Energy Consumption by Our World in Data is licensed under CC BY 4.0.

The UK regulatory regime for hydraulic fracturing (fracking) (in Welsh) by DECC GovUK under licensed under CC BY 3.0.

Radioactive Waste - The Journey to Disposal by IAEAvideo is licensed under CC BY 3.0.

Black Marble: Spheres and Animations by NASA is in the public domain.

Ambience, Machine Factory, A.wav by InspectorJ is licensed under CC BY 3.0.

Justice Close, Leamington Spa by Lydia is licensed under CC BY 2.0.

Back to Resource management videos